Identify the problem areas of your brain

What is a Brain Map?

The Brain Map or qEEG (quantitative electroencephalogram), is as its name says, an exact map of the brain and a diagnostic tool that measures the electrical activity of brain waves.

Brain waves are electrical impulses that are generated when the millions of neurons in your head communicate with each other and reveal important information about the general functioning of the brain, including stress levels, thought patterns, and emotions. A qEEG can reveal wave patterns associated with impulsivity, cognitive inflexibility, anxiety and other symptoms.

The human brain emits electrical activity – waves that can be measured by a device called an electroencephalogram (EEG). When analysing the results of an EEG, scientists identify certain patterns or frequencies of brain waves.  When we are awake we produce alpha waves of medium speed; These waves are clearly seen when a person is in a relaxed state; Beta waves, faster than alpha waves, are present during states of concentration or mental work. Theta waves, slower than alpha waves, are seen during moments of drowsiness, reverie or light sleep. A fourth type of brain wave, called delta, the slowest, occurs during deep sleep.

When neuroplasticity does not work well, these waves show irregular patterns. This can manifest as inattention, impulsivity, stress, depression, anxiety, lack of self-control, insomnia, chronic pain and other conditions. Anxious and stressed people have few alpha and theta waves, while children with attention deficit tend to have a lot of slow waves and do not have much faster waves like beta, which are necessary for concentration.

This is a Brain Map Report

The report shows the sensor data for each wave type, as well as the emotional and cognitive results. The brain is a very
complex organ, our report covers most of the affected brain areas, which influence the onset of symptoms. It shows you whether your brain activity is too high or too low compared to a normal standard and shows how your neurons communicate with each other. 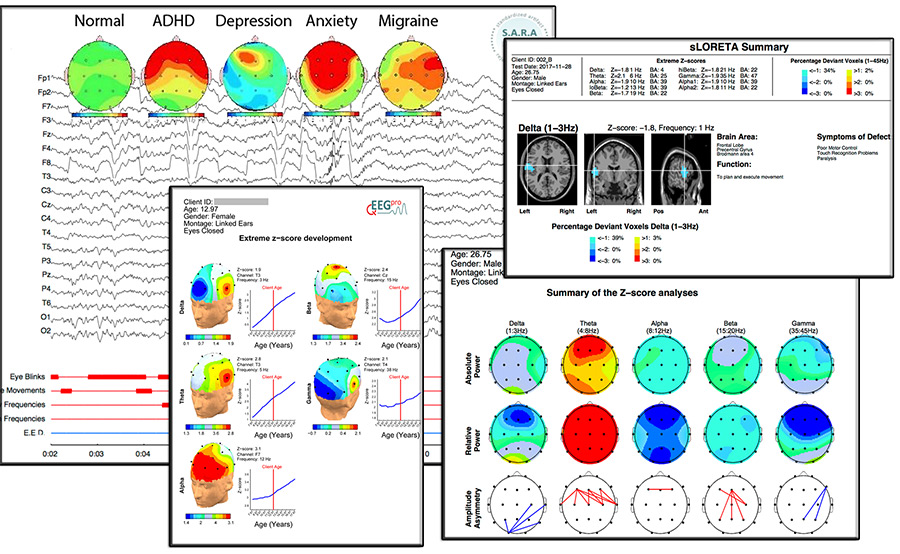 Which are the benefits of a Brain Map?

At Brain Training Center we perform all treatments guided by the results of a qEEG or brain map. This is one of the most effective and accurate tool for evaluating and treating many mental, emotional, and cognitive conditions.

With the information from the qEEG we can create a personalized treatment plan for your needs.

Who can benefit from a Brain Map?

A brain map can be performed on people of all ages: adults, adolescents, children and even infants.  It can help to identify brain wave patterns associated with a variety of conditions, such as